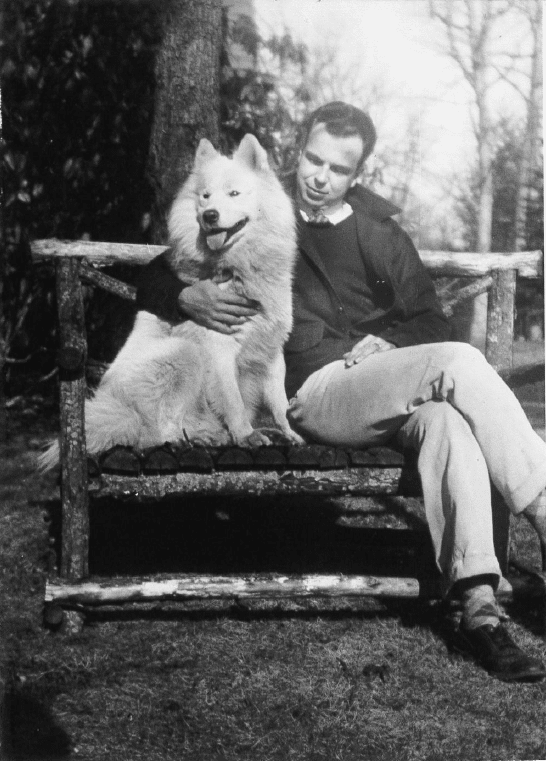 Robert Morrison with his dog.

Most of us do not like to think about end-of-life planning. We view the act of writing a will to be a burdensome acknowledgement of our own mortality; a conversation we would prefer to put off for another day, if not indefinitely. But thoughtful end-of-life planning can also serve as a final gift for prosperity, a tactic to leave things better than we found them. A perfect example of this sentiment can be found in the Morrison Charitable Trust.

On November 8, 1964, Robert Foster Morrison, of Pineola, updated his handwritten, 14-page Last Will and Testament to include a trust that would fund the establishment of a local library and benefit the community hospitals in Avery County for years to come.

The Morrison Charitable Trust was created following Robert Morrison’s death in July 1968. Morrison specified three charitable beneficiaries:  Cannon Memorial Hospital in Banner Elk, Garrett Memorial Hospital (later Sloop Memorial) in Crossnore (these two entities merged into the new Charles A. Cannon Jr. Memorial Hospital in 1999), and the future Avery County Morrison Library in Newland. Morrison further stipulated that the trust would distribute income annually to these organizations and terminate upon the 50th anniversary of his passing. The trust had an initial balance of $300,000.

As with all charitable trusts, which function in a way like buried time capsules, it is important to remember that there is more than just financial treasure to be unearthed in this story. There is a legacy worth remembering.

Making history in the fast lane

In 1923, Howard Marmon from Indianapolis, IN, purchased a large tract of land in Avery County, which included parts of Pineola, Montezuma and Linville. He and his wife, Martha, longed to return to the clean mountain air that Howard credited for healing him from an early teenage bout with tuberculosis. Marmon made his fortune by establishing the Marmon Motor Car Company, and entertained some of the greatest minds of his day, including Thomas Edison, Henry Ford, and Harvey Firestone at his Avery County estate, known as Hemlock Hedges.

The Marmon’s had no children and left a substantial portion of their assets, including the Hemlock Hedges estate to their nephew, Robert Morrison.

Morrison was an only child who grew up in Indianapolis and later split his time between his homes in New York City and Avery County. He is remembered by friends as a kind man with a selfless heart. He was well read and he appreciated the artistic beauty of the mountains.

Morrison’s will stipulated that his long-time friends Martha Guy — who was the owner of Avery County Bank, and local judge, J. Ray Braswell — serve as co-trustees for his charitable trust. Wachovia Bank and Trust Company, which was acquired by Wells Fargo, was named the trust’s institutional trustee.

“Bob (Robert Morrison) told me that he was not going to go through with the trust unless I agreed to serve as a trustee for it,” quipped Guy, with a reminiscent smile. “We became friends early on when he would stop by the bank. He was the type of guy that enjoyed giving to others and he never sought any recognition for it. He had a good giving streak in him; I was always impressed by the fact that despite all of his world travels, he left his money here in Avery County.”

After Judge Braswell died in 1996, the trust stipulated that an Avery County attorney must step in as his successor. At that time, Guy recommended that her friend, Kelly Johnson, a well-respected attorney and mediator, be selected for the position. Johnson graciously accepted and he has served in that capacity ever since.

“I really felt privileged to be selected as a trustee,” said Johnson. “Over the years, I have witnessed the trust make substantial contributions to both the library and to our community hospital. Improvements to the hospital have included everything from funding advanced technology and equipment to bringing in new medical providers. I think we can all say that it worked out well. And I want to be sure to give a tremendous amount of credit to Judge Braswell and Martha Guy for their good management of the trust.”

Cannon Memorial Hospital recently received a $6.5 million grant from the North Carolina Department of Health and Human Services to expand the availability of behavioral health beds in Western North Carolina. Before the new behavioral health beds can be built, Cannon must relocate its medical beds to a new section in the hospital. Proceeds from the Morrison Charitable Trust’s final distribution will be used for this expense.

Chuck Mantooth, President and CEO of Appalachian Regional Healthcare System commented further by saying, “None of this would be possible if it were not for the generous forethought of Mr. Robert Morrison. Thanks to his generosity, along with the careful trust fund management of Martha Guy, Judge Braswell and Kelly Johnson, these funds will be used to improve the lives of countless patients and their families for generations to come.”

To learn more about how you can also leave a legacy for the advancement of healthcare in the High Country, contact the Appalachian Regional Healthcare Foundation at (828) 262-9105, or visit apprhs.org/foundation.