For a few hours every Tuesday morning a group of extraordinary women gather together to paint at Seby B. Jones Regional Cancer Center. These women vary in age, upbringing and occupation yet they all share one word in common – cancer. Despite their differences, this unfortunate common denominator has created in them a close bond held together by brush strokes of trust, love and empathy. 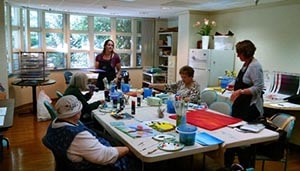 Jennifer Ritter, 45, moved to Boone 20 years ago to start a family with her husband, John. Together, they have two beautiful teenage daughters who value quality time with their parents. It is not uncommon on a Sunday afternoon to find all four family members “jamming out” to music while painting and drinking coffee – lots of coffee.

“Painting has always been a vital part of my life,” said Ritter. “I love being able to share this passion with my creative family and others. Communicating through art often relays so much more than words alone can manage.”

Ritter’s family life was threatened, however, after she discovered a swollen lymph node underneath her collarbone in 2013. After consulting with her doctor and going through a battery of x-rays, CT scans and blood work, she was diagnosed with a type of Non-Hodgkin’s Lymphoma. She had a 5 cm mass next to her heart under her sternum. Ritter’s case was then brought before the Tumor Board, a multi-specialty provider team that meets weekly at Watauga Medical Center. After reviewing her case, the Tumor Board recommended chemotherapy at Seby B. Jones Regional Cancer Center.

Dr. Tim Edmisten, a general surgeon at Watauga Surgical Group, removed the lymph node and placed a portacath into Ritter’s chest at Watauga Medical Center. After the successful procedure, Ritter was placed in Dr. Flint Gray’s care, a medical oncologist at the Cancer Center. Dr. Gray prescribed a very intense regiment of chemotherapy treatment. During this time, Ritter underwent daily infusion treatment at the Cancer Center which caused her to lose her hair. Additionally, she was required to carry an infusion pump home with her to provide continuous treatment. Although, the treatment process was rigorous and caused devastating effects to her body, it worked. Ritter’s chemotherapy treatment ended on her birthday and she was shortly thereafter deemed cancer free.

“Let me start by saying I am so grateful to God, my family, the physicians, the nurses and the countless others who encouraged me, prayed for me and cared for me throughout this difficult process,” said Ritter. “Unfortunately, however, post cancer recovery has been a struggle. There are many blessings to count, but the expectation to instantly and joyfully get back on your feet is unrealistic. When treatments concluded, I was left with the aftermath of physical and emotional fallout. Like a small vessel floating in a vast ocean of uncertainty, I felt very alone and frustrated. There were many things to process, and I could not adequately express to my family why mommy was slow, exhausted and pensive. They, too, were having a hard time understanding… after all, I was cancer free!”

Enter Tyler Deal, a Boone native, artist and arts educator. Last year, Deal approached the director of Seby B. Jones Regional Cancer Center, Sandi Cassidy, in hopes of establishing a complimentary Open Painting Studio Program to create an opportunity for survivors across the community to connect with each other through the arts. Deal also presented the idea to Joe Miller of Cheap Joes Art Stuff. Cassidy and Miller loved the idea, encouraged Deal to pursue the dream and Miller volunteered to donate all necessary painting materials for the program.

Next, Deal proposed the program to the Cancer Resource Alliance Board of Directors. The project was well-received and unanimously approved to begin as a complimentary offering open to all patients currently undergoing treatment or having previously completed treatment at the Cancer Center.

“The support we have received since launching this program has been phenomenal,” said Deal who has several family members and friends throughout the community that have joined the ranks of cancer alumni and the remembered over the years. “From the very beginning, my goal has been to create a stress free, safe space where individuals can gather together with as much or as little painting instruction as they would like. I wanted to hold a space where survivors were free to process what is really going on for them and truly meet them where they are through words or by working with their hands. I am honored to be welcomed in to such a sacred place by all who attend.”

Once everything was put in place, Deal’s first open painting studio had only one participant, Jennifer Ritter. 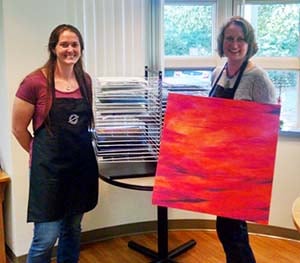 “We hit it off instantly,” said Deal. “We just sat down and started painting, then talking, then crying and eventually laughing. The space allowed us the freedom to share realistically what was in our hearts, which does not always have to do with cancer alone, but rather all of who we are.”

Together, the women encouraged other cancer survivors to join them and today the program welcomes five to 10 individuals each week and the number continues to grow. When speaking about the program and their unique friendship, Ritter says Deal is the “visionary,” while Deal refers to Ritter as the programs “backbone.”

“Early on if you would have told me that there were blessings to be found in cancer, I would have called you crazy,” said Ritter. “However, Tyler is a blessing, these art classes are a blessing and the friendships I have formed are a blessing. For me, these classes have also taken an unfair emotional burden off of my family. These classes have allowed me to connect with a group of women who have all walked that same lonely road. However, now we walk that road together.”

Marylyn Cope, a fellow painting studio participant said, “If we don’t want to talk about our cancer, we don’t have to. However, if we need to, then everyone is right there, they understand and they have empathy.”

Jackie Adams, another studio participant, is in the process of painting a picture of the old video game character Pac-Man. When asked her motivation behind the painting Adams said, “My Pac-Man eats cancer cells.”

Phyllis Templeton, a breast cancer survivor who is currently painting a nature scene with birds said, “These classes are very important to me. They have allowed us the freedom to express ourselves in different ways.”

Ritter concluded, “I am less frustrated outside of that classroom because of what goes on inside of that classroom. Tyler has created a nourishing, confidential, grace-filled space where understanding and encouragement take place. It is a place of healing. I’d love to see the program reach more people.”

Deal, who is affectionately referred to at the Cancer Center as the “Artist in Residence,” hopes to eventually expand the program to include more open studios at different times, days and with a variety of artistic medium options like clay and therapeutic writing, in addition to painting. She would like the program to be available to more survivors, their families, spouses and children. Equally important is Deal’s goal of having an open studio time for the Cancer Center staff. In addition to helping the patients and community, she believes that the program could go a long way in helping to combat compassion fatigue.

During the month of October the Blue Ridge ArtSpace will showcase Pathways, an exhibit of artwork by the Cancer Center’s Open Painting Studio participants. The exhibit’s opening reception is Saturday, October 10th between 5:30 and 7:30 pm and is open to the public. Deal and several of the artists will be on hand to introduce their work and share their stories. The exhibit will be on display from October 10 until November 7, 2015. Blue Ridge ArtSpace is located at 377 Shadowline Drive in Boone.