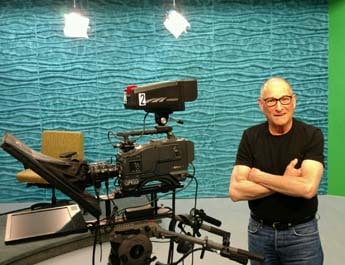 As a young boy in Morgantown, West Virginia, Michael Fields can clearly remember the afternoon he walked home from school to discover a delivery man carrying a mystery box into his parent’s home.

Captivated by curiosity he stood at attention as the family’s first television came to life in their living room. From that moment on, Fields knew that he wanted to go into show business. While his siblings played in the yard after school, he spent most of his childhood chasing story leads and shooting amateur news reports with his father’s eight-millimeter camera.

After college, Fields landed his first television job in Atlanta at WAGA as a floor man. His job consisted of hanging lights and sweeping the set between shows. After learning the business from the ground up, he went on to climb the ladder at major television stations in Pittsburgh, Chicago, Boston and New York City. Looking back, his favorite position along the way was Executive Vice President of QED Communications, where he became close friends with Fred Rogers – best known for Mr. Rogers Neighborhood.

In 2010, after a 50-year-career in television, Fields moved to Seven Devils, North Carolina, to semi-slowdown. Today, he is proud to share his industry knowledge with students as the General Manager of Appalachian State University’s AppTV station. Since its inception in 2015, Fields has served as the resident expert for launching the channel, which features a full range of programming produced by students through the Department of Communication.

“Working with our students is the most inspiring thing I have ever done,” said Fields with a smile. “AppTV has provided a platform for them to learn and for the world to witness the remarkable things taking place at Appalachian State.”

An unfortunate plot twist in Fields’ life story took place a few months ago when he discovered a walnut-sized growth on his thigh. After seeing a specialist in Charlotte, his physician confirmed the devastating diagnosis of high grade myxofibrosarcoma. His doctor explained that treatment would require radiation followed by surgery, but that the silver lining was that he could receive his radiation treatment in Boone, North Carolina, at the Seby B. Jones Regional Cancer Center.

After returning to Boone, Fields went to the Cancer Center located just a few miles away from his home. There he met with Radiation Oncologist,Dr. Yvonne Mack who explained that his cancer was treatable, but would require 25 consecutive days of radiation followed by surgery. Discouraged, Fields considered his options and decided that at age 75 he had lived a good life and would let nature take its course.

Unwilling to give up, knowing how the cancer would painfully destroy his body, Dr. Mack called her patient a few days later in hopes of convincing him to reconsider. The two exchanged pleasantries, but Fields’ mind was made up. Equally stubborn in her resolve, Dr. Mack called him two more times to plead her case. Her persistence ultimately paid off. After her third call and a follow-up call from his physician in Charlotte, Fields decided to heed their advice and proceed with treatment.

“I’d say the biggest lesson learned throughout this whole experience has been that you cannot go through life thinking you know everything,” said Fields. “The medical professionals I was working with knew that my cancer could be treated and that it was worth the fight. Ultimately, I had to surrender my pride and trust their expertise.”

Six weeks had passed since his initial observation to his first day of treatment. During that time, his tumor had grown to the size of a small grapefruit and was threatening to spread to other parts of his body. Fields credits Dr. Mack and the Cancer Center for answering all of his questions with grace and making him feel comfortable in an uncomfortable situation.

As expected, by the third week of treatment, the radiation began to take its toll leaving Fields zapped of energy and unable to return to work. At that time, he considered giving up, but Dr. Mack remained unwavering in her support and reassured her patient to press on. At the conclusion of his treatment, the tumor had shrunk 30 percent, a very gratifying initial response. He then returned to Dr. Jeffrey Kneisl, his orthopedic oncologist, at the Levine Cancer Institute for a wide resection of his tumor on January 29, 2016. The surgery was completed without complication, and 90 percent of the tumor showed necrosis (killing of the cancer by his preoperative treatment) and today Fields is cancer free.

“Healthcare does not get better than what you find at Seby B. Jones Regional Cancer Center,” said Fields who was pleased to receive the bulk of his treatment close to home. “In this era, where healthcare has become painfully impersonal, where institutional hospitals are more concerned with research than patient care, this is the answer. Keep it small, keep it personal, keep it local and keep it well managed. That is what the Cancer Center at Appalachian Regional Healthcare System represents to me. I am a satisfied customer and a grateful patient.”

Today, Fields has returned to his position at AppTV where he hopes to continue to teach, inspire and create opportunities for students to follow in his career footsteps. “I am a firm believer that regardless of how long you have been out of school, life continues to send you tests. If my story can encourage these students to stay the course and never give up, then I’d say that is a life worth sticking around for.”