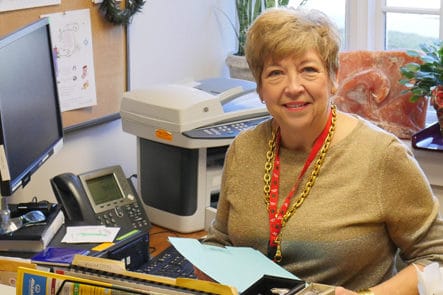 Can you remember your first teenage job interview? For most of us, we can recall the “permission to borrow the family car” discussion with dad followed by unsolicited wardrobe advice from mom, before backing down the driveway to apply for that all-important freedom-granting summer job.

More than 50 years ago, Brenda Hoss’ first job interview was quite different. For the shy 17-year-old, it meant leaving behind her family in Roan Mountain, TN to pursue a new dream.

Hoss watched the scenery race by her window as her mother drove the family’s 1962 Impala to the original red brick Charles A. Cannon Jr. Memorial Hospital in Banner Elk, NC. With her mother at her side, the nervous teenager applied for a nursing ward secretary position with Peggy Stubbs, the director of nursing at the time.

“I remember being very appreciative that my mother came into the interview with me,” said Hoss. “If I didn’t tell what I needed to tell, my mother told it for me. Thanks to her help, I was offered the job in September 1965.”

Without a car of her own, Hoss knew the first order of business would be to find a place to live within walking distance of the hospital. Miss Stubbs recommended that she rent a room in one of the hospital-owned houses, which still exist today on the Lees McRae campus.

Caught up in the adventure, Hoss rented a room with three other young female hospital employees, one being her cousin who worked in medical records. Three times a day, a hospital-owned van driven by Hack Ruppard or another of the maintenance men, would stop by their house to pick up the women for the next shift. At shift end, he delivered the women coming off duty back to the houses.

“We always felt safe with Hack,” said Hoss. “In the winter, he put chains on the tires and we never missed a day of work.” 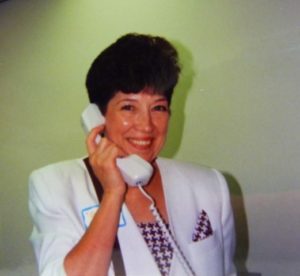 After working on the nursing floors for a few months, the young secretary received an unexpected call from Juanita Shomaker, the hospital’s administrator. Shomaker explained that she wanted Hoss to become her secretary, a highly regarded position within the hospital.

“I was flabbergasted with the proposal and politely explained to Mrs. Shomaker that my qualifications were limited as I had never operated an electric typewriter, only using a manual in high school,” said Hoss. “Mrs. Shomaker just smiled, probably thinking of her own early beginning, and said she would train me as we went along.”

Shortly after beginning her job, Hoss was forced to find a new residence because the hospital sold its row of rental houses to the college. According to Hoss, an angel appeared in the form of Flossie Rowe, a widow and the hospital’s food service director, who offered her room and board.

“Every morning, Flossie prepared a hot breakfast for me and a bagged lunch to take to work,” said Hoss. “In the evenings, if she were headed out to visit with her lady friends, she would invite me to tag along. I am so grateful for the friends I made along the way.”

“Over the years, I was indoctrinated into healthcare,” said Hoss. “I learned how to operate that typewriter and later the computer. Mrs. Shomaker wore many hats and I did my best to anticipate her needs and to support her and all of the administrators that followed her.”

During that time Hoss married, had two sons and is now a proud grandmother. After 51 years of service she will retire in December 2016 as the longest tenured employee to ever work for Cannon Memorial Hospital. When asked about her legacy, Brenda said simply, “I hope I have contributed and I hope I have earned my pay.”

“I’m so grateful for Peggy Stubbs and Juanita Shomaker, who all of those many years ago saw potential in a 17-year-old girl,” said a teary eyed Hoss. “That’s what this healthcare system is all about, bringing out the best in others.”