Corrie Freeman, a fourth grade teacher at Hardin Park Elementary School, taught more than reading and arithmetic to her class this year.

The story began last May when Freeman, a native of Spruce Pine, was diagnosed with endometrial cancer. Described by her collogues as “selfless and just awesome,” Freeman decided early on to look for the silver linings.

Her physician, Dr. Beverly Womack of Harmony Center for Women’s Health and Vitality, recommended that she see a gynecological oncologist at Presbyterian Medical Center in Charlotte.

“Through tears, I remember asking if it would be possible for me to receive my consultations in Charlotte and my radiation treatment here [in Boone] so I could continue to teach,” said Freeman. “I was delighted to find out that Seby B. Jones Regional Cancer Center, located in Boone, was well equipped to provide state-of-the-art care for my cancer.” 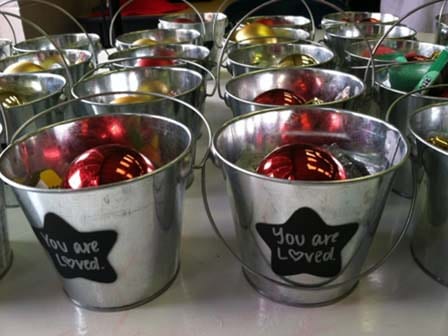 One example of this can be found in a book Freeman read to her class at the beginning of the school year called “Fill a Bucket: A Guide to Daily Happiness for Young Children” by Carol McCloud. Freeman explained to her class that in the year ahead they would grow in areas beyond that of the textbook. That they would learn the importance of using the time they have been given to make a difference in the world.

As the holiday season approached, it became apparent that Freeman’s positive outlook on life proved to be contagious. During a class discussion, a student raised his hand and asked “Miss. Freeman, can we do anything to fill the buckets of other people with cancer this Christmas?”

After several minutes of brainstorming and a few phone calls, the students were delighted to learn that they could donate gifts for patients at the Cancer Center in Boone where their teacher had been receiving care.

Like elves in Santa’s workshop the students all agreed to purchase buckets of their own, 22 in all, and fill them with Christmas candies, ornaments and gifts. They also wrote cards with encouraging words like “You’re brave, strong, courageous, and you have a warrior’s heart.”

As the sleigh, Freeman’s Toyota Camry, was being loaded with buckets the students were delighted to learn that their teachers treatment, over the past seven months, had worked and she would be considered cancer free by Christmas.

“I am so thankful for the love and support of my students,” said Freeman. “The fact that they rallied around me and wanted to help others battling cancer had a huge impact on my own Christmas healing miracle.”

Last week, Freeman, with two of her students at her side, made the special Christmas delivery to the Cancer Center. As the students distributed the buckets with hugs attached, Freeman thanked the staff for their love, support and healing treatment.