The Mary Finley Story: Understanding the heart of second chances 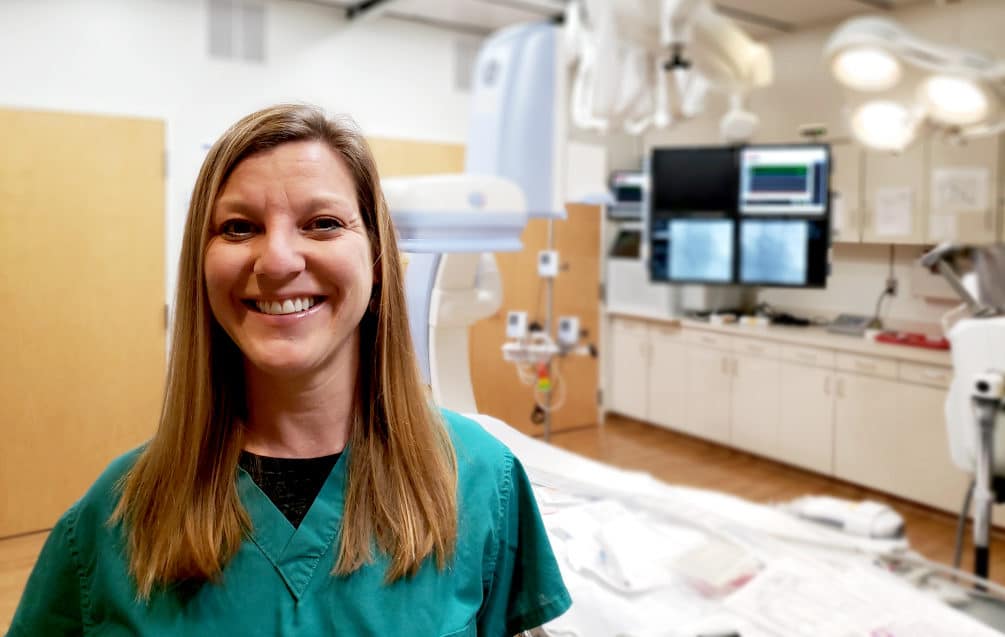 How do you define love? To every retailer’s delight, this question seems to always resurface at Valentine’s Day. For better or worse we have become conditioned as a society to celebrate the “heart holiday” with flowers, chocolates and greeting cards. Although these gifts are certainly appreciated, one could argue that dinner reservations and overstuffed teddy bears do not in and of themselves define love.

Mary Finley, the cardiovascular lab manager at Watauga Medical Center defines love differently. At the hospital she and her team work with interventional cardiologists to provide life-saving heart procedures for patients in need of a second chance. After receiving her own share of second chances in life, she defines love as an action, made evident through undeserved and unconditional grace.

Mary was the youngest of six children in her family’s home in Wilkesboro, NC. It was there that she shared a cramped bedroom with her twin sisters and spent most of her free time outdoors playing by the creek or at church.

“During those days our family made up half of the cast in the Christmas play,” she quipped. “I was that kid who even received the perfect attendance award at Sunday school.”

Her favorite childhood memory took place on Friday nights. After a busy week of school and extracurricular activities, all of the siblings would gather in the kitchen to drink RC Cola and make their own Chef Boyardee Pizzas.

“That was the only night of the week that we were allowed to have soda,” she shared. “I know it sounds insignificant in terms of memories, but my parents worked really hard to provide for all of us. Family nights were really important in our house.”

Mary got caught up in the wrong crowd however when she turned 15 years old. As a freshman in high school she met a boy and her whole world changed. She ran away from home multiple times before deciding to drop out of school, run away for good and to marry her boyfriend. To no avail, her parents pleaded with her to change her mind, but eventually agreed to honor her wishes and to stand by her side at the wedding.

“I thought I knew what I wanted,” she said. “I mean what teenage girl doesn’t know what they want? I found out years later that my parents prayed a thousand prayers for me. I needed every one of them.”

Reality set in for the newlywed couple when the first bill appeared in their mailbox. Unwilling to admit that she was out of her depth, Mary decided to return to the classroom and to work as a maid after school, cleaning houses for rent money.

“I’ll never forget cleaning the house of a young paraplegic lady,” she said. “We quickly formed a friendship and outside of cleaning her house once a week, I volunteered to go over to her home each day during my lunch break to help her get around the house. I think that’s when it hit me that I wanted to go into healthcare. I liked walking into a messy situation and leaving it better than I found it. I like to look at life that way.”

After she graduated from high school an old church friend and mentor recommended that she start her healthcare career by enrolling in the local radiography program. It was there that she discovered her passion for special procedures like heart catheterization and vascular intervention. Determined to leave house cleaning in the dust, the 17-year-old went on to spend every free moment studying her textbooks, working second shift clinicals and third shift x-ray.

All of her hard work paid off at the end of her program when she landed her first job as a radiology tech at Iredell Memorial Hospital in Statesville, NC.

Unfortunately, her marriage suffered and eventually ended during that time. Due to the unstable nature of their relationship, Mary would often have to hide from her ex-husband. “It was a bad time in my life,” she shared. “But, I would not let it define me. I was a very determined young lady.”

Embarrassed and feeling much like the prodigal daughter, Mary called her parents after five distant years to break the news. Surprisingly, within a few hours her parents and all of her siblings pulled up to her new apartment with truckloads of furniture and everything she needed to survive.

“There were no questions asked and no judgments made,” she said. “I don’t know of too many families that could have done that. They never gave up on me.”

Before long she remarried and applied for a position at Watauga Medical Center in Boone, NC. It was there that the late and beloved Director of Radiological Imaging Services, Wilma Price Redmond, hired Mary as a tech and then quickly promoted her to Special Procedures Supervisor.

“I had so much respect for Wilma,” she said. “Even when she was sick with breast cancer she continued to work, walking around the hospital with her IV pole and her chemo bag hanging by her side. I envied her grit, her kindness and her positive spirit. She taught me how to be leader.” 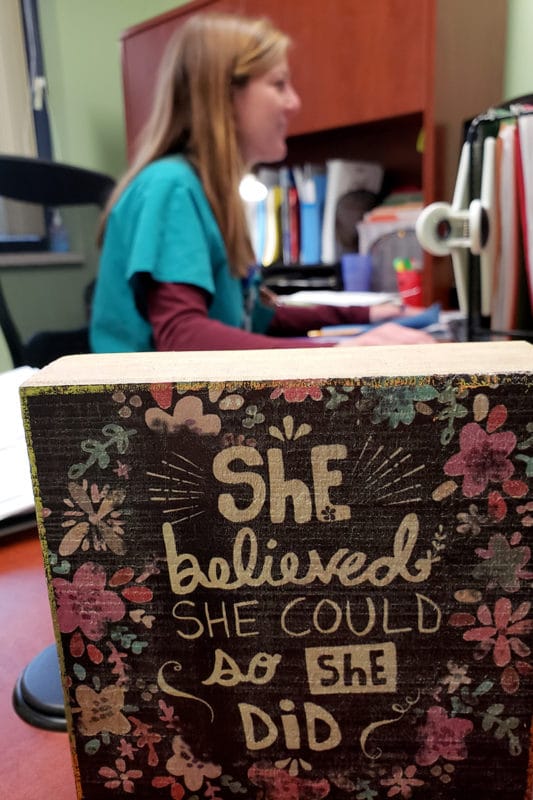 Mary’s whole world changed again when she had her son, Kyle, in 2000. Eager to spend those early years with her son, she left the hospital and took a more flexible job handling injury claims for an insurance company.

“As a mother, I’ll never regret that decision,” she said. “And that job also allowed me to work in a different side of healthcare. One in which I got to help patients outside of the hospital.”

But soon after her son started school Mary longed to return to the action. To her, nothing was or ever will be more fulfilling than a job in which she literally gets to “scrub in” to help save lives.

During her time away, Appalachian Regional Healthcare System formed and took major strides to improve heart health services in the High Country. Mary was delighted to learn that The Cardiology Center had opened as an outpatient facility on the campus of Watauga Medical Center to provide diagnosis and treatment for heart and vascular disease. A state-of-the-art catheterization lab was also added to the second floor of the hospital to provide much needed interventional cardiology procedures, such as coronary stents and implantable pacemakers. A second cardiovascular lab was added in 2015 to provide patients with better access to vascular surgery.

“We’re in the business of saving lives,” she said. “When it comes to the heart, every second counts. Thanks to these additions, we no longer have to send STEMI cases (heart attack patients) down the mountain for life-saving care. I’m proud to say that we provide everything from cardiac caths and stents to defibrillators and pacemakers to advanced vascular surgery right here in Boone.”

Mary was promoted to cardiovascular lab manager in 2013. As a “working supervisor” she works alongside of her team of technicians and interventional cardiologists to perform more than 1,000 procedures a year at Watauga Medical Center.

Another mentor in Mary’s life has been Dr. Paul Vignola, an interventional cardiologist that she has worked closely with for the last six years. “Dr. Vignola has my total admiration,” she said. “He has been a huge mentor for me not just in the cath lab but also in life. I cannot thank him enough for his support and guidance over the years.”

Shortly after returning to the hospital Mary’s mother, Carolina, was diagnosed with ovarian cancer and became a patient at the Seby B. Jones Regional Cancer Center in Boone. Since her diagnosis in 2007, Carolina has undergone more than 20 surgical procedures at Watauga Medical Center. Today, after losing her husband, Mary’s dad in 2013, she is still fighting her way through chemotherapy treatments.

Around that time Mary also divorced her second husband. “As you can imagine, that was a very difficult time in my family’s life,” she said. “And it took me awhile to admit that I was struggling with depression. To cope, I tried to channel my energy into my work. And then I would walk across the street to the Cancer Center to try to encourage my mom.”

But, as is often the case with parents, it was her mother that encouraged her. Carolina, an artist by trade, gave a beautiful print to her daughter that reads “She believed she could so she did.” These seven words etched in love beautifully described both mother and daughter. The painting is now prominently displayed in Mary’s office at the hospital as a reminder to never lose faith.

“My mom never lost her faith in me,” she said. “I truly believe that everyone deserves a second chance in life. I’m on chance 10,999 and I’m doing the best I can with it. And it amazes me that God has given me that many chances and he still has not given up on me. My family didn’t, my God hasn’t, and this organization hasn’t. I think everyone that walks in our door at the hospital deserves whatever number chance they are on. To me, that is more than healthcare; it’s love. It is undeserved and unconditional grace.”