The Tony Weaver Story: Local man brought back to life after heart stops 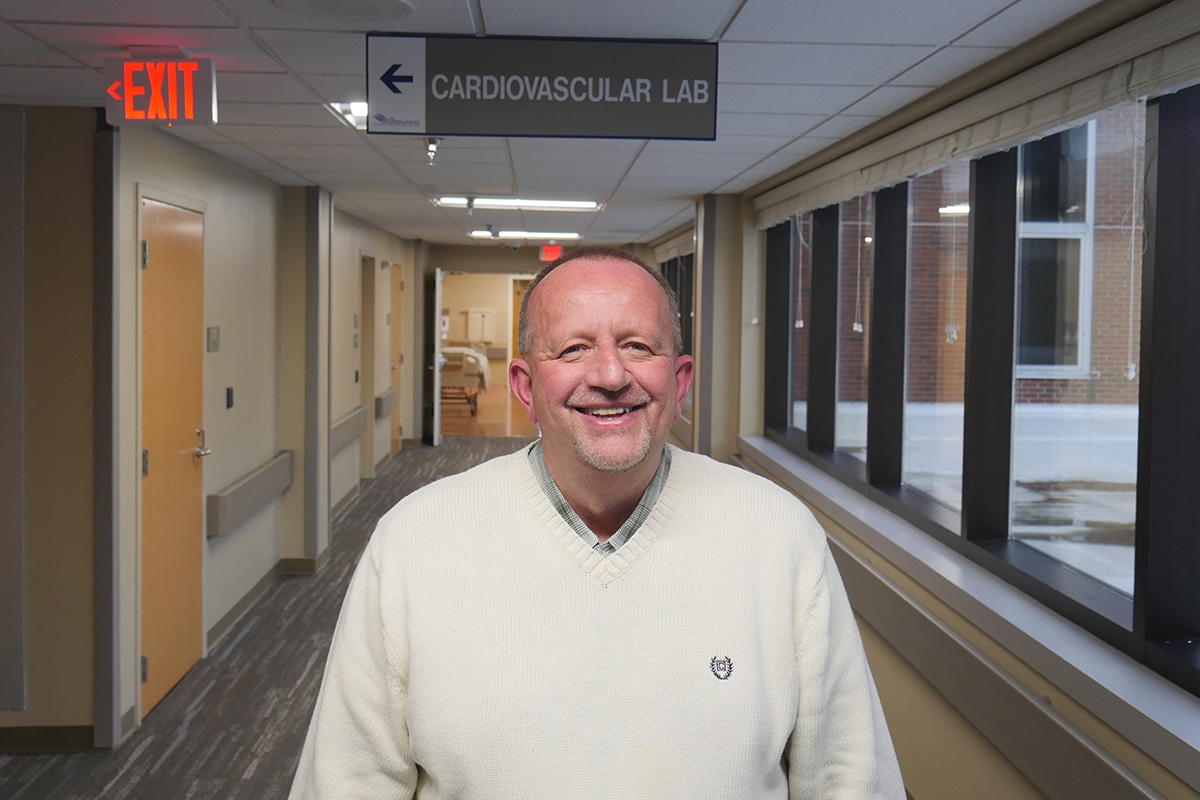 Are you prepared to die today? Perhaps no question in life is more sobering than the one that causes us to consider our own mortality. Most of us, if given the opportunity, will avoid death and dying conversations like the plague – pun intended. But if faced head on, tough questions can also challenge us to make the most out of every opportunity.

Tony Weaver, an adventure loving Ashe County resident, knows firsthand the danger of taking life for granted. After experiencing chest pains, he made an appointment at The Heart & Vascular Center(formerly The Cardiology Center) in Boone, NC, part of Watauga Medical Center (WMC). It was there, during his appointment, that he went into cardiac arrest and his heart stopped beating for nearly five minutes. When it counted most, his medical team responded with what Tony can only describe as “divine intervention” to save his life. 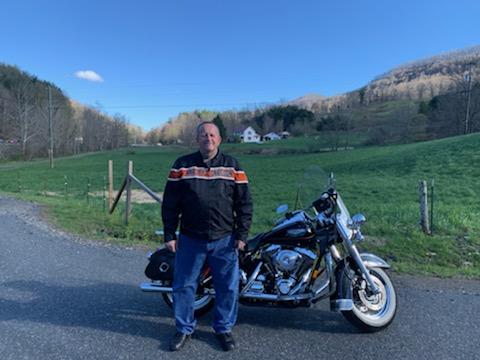 Tony got his first motorcycle when he turned six years old. Much to his mother’s chagrin, his father proudly encouraged his son to race his older brother, Billy, up and down the country road in front of their home. And so it was a thunderous transition from boyhood to manhood– an unspoken acknowledgement from father to son that the young buck has what it takes.

Tony idolized his father, Reggie, a highly decorated World War II veteran with a purple heart. Together they would hunt, work on their bikes in the garage, and go to church with his grandmother on Sunday.

“Early on I was a wild man on that bike,” he said. “I used to outrun the highway patrol. I guess I was just trying to prove my place in the world. It took me awhile to realize that dad was tough not on account of his war stories, but because he knew what he stood for in life. He used to say, ‘You never know what’s going to happen and it’s a good thing you don’t.’ I guess his point was that none of us are guaranteed tomorrow, so why worry about it. Instead, he was a lot more interested in making sure we made the most out of today.”

Tony went on to have a successful career in plant operations. After he completed his degree in applied engineering, he worked for 38 years as a supervisor in various automobile and electronic factories. During that time, he hired, trained and mentored hundreds of employees and today he still manages a team of 30.

“I have two rules when it comes to leading people,” he shared. “Be fair and be honest. People may not always like you as a supervisor, but they will still respect you if you are fair and honest with them.”

Perhaps his best hire took place in 1997. On that day, he hired his future wife, Brenda Weaver. “I tried to stay objective during the interview, but truth be told, I was pretty distracted by her good looks and personality. Well, as fate would have it, we eventually determined that we would be a better suited as husband and wife than as supervisor and employee. So she quit and I married her. That was the best business decision I’ve ever made.”

The Heart of the Matter

Tony was concerned earlier this year when several employees around the plant told him that his face was pale. During that time, he also remembers that he felt unusually tired and that his heart rate had slowed down to 44 beats a minute. A healthy heart ranges between 60 – 100 beats per minute.

The very next day, on January 24, 2019, he scheduled an appointment at The Heart & Vascular Center. It was there that Dr. George Hanna, a board certified cardiologist, ran a diagnostic test known as an electrocardiogram (EKG). The results confirmed what Dr. Hanna had suspected. He had an abnormally slow heart rate that would require a pacemaker.

Tony then unexpectedly went into cardiac arrest and collapsed in the office. Eager to restart his heart, Dr. Hanna called for help and his team responded without missing a beat.

Kim Denny, RN, a pacemaker device nurse at The Heart & Vascular Center literally jumped on top of the exam room table to start performing CPR. Her colleague Carly Blevins then charged the defibrillator and applied the single shock needed to save his life.

“Every three months we are required to complete an in-service CPR training class at the hospital,” said Denny. “In that moment, all of my training came back to me. I also cannot say enough about Carly, as she charged the defibrillator I noticed her praying for Mr. Weaver. They just so happen to be friends outside of the hospital.”

Now that their patient was revived and stable, the cardiology team needed to determine if Tony’s low cardiac output was a result of a plumbing issue (coronary blockage) or an electrical issue (communication malfunction) within the heart or a combination of the two.

To find out, Tony was then transported to Watauga Medical Center for an emergency cardiac catheterization. The diagnostic procedure was performed by WMC’s new Interventional Cardiologist, Dr. Steve Filby. Fortunately, the test revealed no blockage and thus ruled out a plumbing issue. Had there been a coronary blockage, Dr. Filby could have then performed a minimally invasive artery widening procedure known as an angioplasty to improve blood flow to the heart.

Thanks to the catheterization it was then determined that Tony’s heart problem was in fact caused by an electrical issue. For Tony, that meant that the top part of his heart and the bottom part of his heart were no longer communicating with each other. To correct this disorder Dr. Andrew Hordes, a cardiologist and device specialist at WMC, inserted a two wire pacemaker that same day. The pacemaker puts one wire in the top part of the heart (atrium) and another wire in the bottom part of the heart (ventricle) and then uses the signals from the atrium to tell the pacemaker when to pace or reestablish the timing between both parts of the heart. Essentially, the pacemaker will now ensure that both his heart rate and heart rhythm stay in normal healthy ranges.

“Mr. Weaver was fortunate enough to be in the right place, at the right time, with the right people,” said Dr. Hordes. “After the team resuscitated him, and it was determined that he had no coronary blockage, we were able to put in a pacemaker. By putting in a pacemaker, we not only fixed the electrical problem with his heart, but we prolonged his life.”

Tony was cleared to return home two days later. When asked about his experience he said, “It is clear to see that God had no intention of taking me that day. He put all the right people, with all the right training in my path to save my life.”

Kim Denny, the quick thinking nurse that performed CPR in the office now serves as one of Tony’s pacemaker device nurses. Denny and her fellow device nurse, Leslie Wilson, RN, remotely monitor thousands of pacemakers every day from The Heart & Vascular Center.

“On the Saturday he went back to work, I remember we were curious to see if all of the equipment he works with at the factory would interfere with his pacemaker,” said Denny. “So, I asked him to send me a transmission after he walked through the entire plant just to make sure it was safe and it was. I think he takes comfort in the fact that we are always monitoring and ready to help if he needs us.”

Pacemakers have come a long way over the years. Like Tony, the majority of patients do require the dual chamber two-wire system. Fortunately, this state-of-the-art pacemaker is small, MRI safe and Bluetooth compatible, which allows for remote monitoring and as needed heart rhythm adjustments. Watauga Medical Center also recently started offering what is referred to as the world’s smallest pacemaker, a wireless system, for patients who qualify.

Outside of his pacemaker, Tony admits that nothing makes his heart beat with more vigor than riding his motorcycle. “I have been riding motorcycles for 52 years now,” he said with a grin. “And thanks to God and the medical team at Watauga Medical Center, I’ll keep riding till the day I die, which is hopefully a long time from now.”

At work, he has become an outspoken ambassador for intentional living. “I try to remind my team that none of us are guaranteed tomorrow,” he said. “I feel a responsibility to always point people toward the things that matter in life. I believe that is why I am still here. And I’m going to live the rest of my life by the scripture verse Joshua 24:15, ‘…As for me and my house, we will serve the Lord.’”