For most men, few things in life are considered more valuable than their car, especially if their car is an old Ford Model T. Floridian Graham Haile’s appreciation for the Tin Lizzie took root a couple of years ago when his son-in-law invited him over to help tinker on his 1913 Model T.

While their wives gabbed in the kitchen, the men enjoyed a welcome reprieve in the garage exchanging bolts, grunts and the occasional uproar of laughter. Hours past and oil was changed as an unspoken appreciation formed between two men and an antique car. This new hobby eventually led Haile to purchase his own 1921 Model T. Now, regardless of which house their wives want to visit, Haile jokes there is a car in the garage ready to entertain the boys. 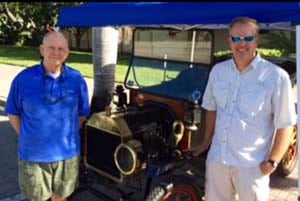 “My heart attack caught me off guard and essentially served as a wake-up call to take better care of my health,” said Haile. “After my unplanned yet successful first procedure at Watauga Medical Center, I did not consider going anywhere else for my second.”

One month later Haile made the 12-minute commute from his cabin in Boone to Watauga Medical Center. His second stent procedure was completed without complication and Dr. Vignola reported that there was no residual damage as a result of the heart attack.

“I could not get over the personal and professional care I received from Dr. Vignola and the staff at Watauga Medical Center,” said Haile. “In reflection, similar to conducting routine maintenance on the engine of my Model T, I need to take better preventative care of my heart.”

Shortly after his second procedure, Haile was cleared to return home with full functionality. Today, he has a new appreciation for his heart, his family and the time he gets to spend under the hood with his son-in-law.